Thailand, a perfect blend of serenity of nature along with the modernization. Name of this country alone is enough to bring a smile on many a faces due to its picturesque locations, mesmeric beaches, magnificent temples and delicious cuisine. While this country has always remained a centre of attraction for the tourists, it has been influenced by the Indian culture in the times of King Asoka and many more. As being a place for tourism, the five places worth visiting while going to Thailand for an unforgettable journey are: 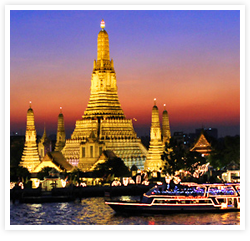 About : Being the Capital, Bangkok remains number 1 in the main Tourist Attraction in Thailand. The most populated city of this country, Bangkok is known for many a places to visit. One can have the feel of India and Hinduism by visiting Erawan shrine and the Great Swing. For knowing the history and if facts interests one, museums like Royal Barge National Museum and Bangkok National museums are worth visiting. The Buddhist Temples named Wat Arun and Wat Phra Kew are one of the most famous sites to be visited in this city. 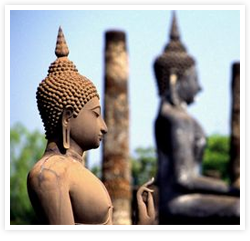 About : The word Sukhothai, literary means Dawn of Happiness. The town as established in the 13th century on the outskirts of Khmer empire. Sukhothai became the first truly independent kingdom after defeating the Khmers. The province of Sukhothai is far-famed for its historic Sukhothai city, religious temples, and the famous UNESCO site- Sukhothai Historical Park. The other famous places of interest include Ramkhamhaeng National Museum, Sri Satchanalai National Park, Ramkhamhaeng National Park, and the Royal Palace etc.

About : Can be considered to be a city of temples with over 300 breath taking and amazing temples, yet this city is quite modern which can be a good shopping spot for designer clothes and fine dining options. One of the most grand and magnificently decorated temples to visit is the Wat Phra Sing. Along with the temples, for exploring the history, the Chiang Mai National Museum is quite a place to visit.

About : Visiting this city is surely adventurous as well as exciting as here, one can find various scenic locations and interesting events like Thai Boxing. Also known as Muay Thai, martial arts experts can be witnessed live, boxing in the ring which can trigger the adrenaline rush in anyone’s body. The Phuket FantaSea Show is one the strangest shows one can ever watch, where artists combine humour and fantasy with the myths, live on the Kamala Beach. A 45 meters high Buddha statue has turned into a new attraction, one can reach its top for a mesmeric yet breath-taking view. 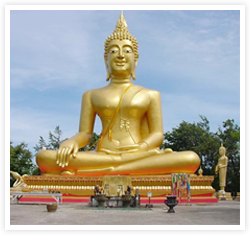 About : Second main attraction of Thailand after Bangkok, Pattaya boasts its large beach resorts and exquisite beaches with dazzling night life and water sports. Adventure seekers can enjoy paragliding, jet skiing and sail boating in here. One of the main attractions of Pattaya is the Elephant Village where the method of ancient training of this gigantic mammal is performed daily. Submarines offering Coral Reef Sightings and marine life is one of the experience everyone should have. Along with all these, the other attractions are Underwater World Pattaya, Thai Alangkarn Theatre, Ripley’s Believe it or not Museum, Million Years Stone Park and Pattaya Crocodile Farm. 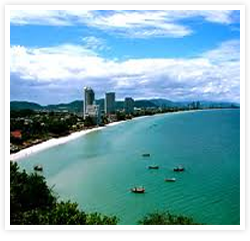 About : Hua Hin was established under the reign of King Rama VII in the early 1920s as one of the ideal getaway. It was after this that the resort was established into a Royal resort that led to its extreme popularity. Hua Hin served as one of place of retreat for the local as well as foreigner travelers for more than 70 years. The region is once again voted as one of the best places in the world to retire owing to its low cost accommodation, beach facing living, and expat friendliness.

About : Kanchanaburi is one of the most amazing provinces of Thailand which boasts great beauty and a rare charm. Situated to the west of Thailand, it was established during the 19th century CE, by King Rama I. Kanchanaburi is the birthplace of Phrabhavanaviriyakhun, the Buddhist monk. The northwestern region of Kanchanaburi is dominated by the amazing River Kwai Valleys and is known for spectacular waterfalls, great mountainous scenery, lakes, and caves.

About : Known for its vast beaches with the with sands, coconut trees and coral reefs, this island is a Tourist Attraction in Thailand. Perfect for artists and art lovers, this island hosts the cultural event known as Ten Stars Samui Art Party, where numerous artists (local & international) visit with their artworks. Another attraction of this beautiful island is Buffalo Fighting Festival on New Year.

About : Krabi is a small township, the capital of Krabi province on the western coast of southern region of Thailand located at the mouth of the River Krabi. Made up of more than 80 small islands, most of the region of Krabi is covered by national parks. The Hat Noppharat Thara, Railay, Ao Nang, and Ko Phi Phi National Park are some famous point of interest of Krabi. The region is also known for its coral fringed diving sites and is highly preferred by those in love with kayaking, bird watching, sailing, and snorkeling etc.